Wolf Cub Sleep-over and BBS get together

The Wolf Cubs arrived at the 1st Newbury Scout hut at around 14:00 on Saturday, all very smartly turned out in their uniforms. After Grand Howl, the Cubs played a few ‘get to know you’ games and then some favourite cub games. All accompanied with the warmth of the log burner in the hut.

The 1st Newbury Scout hut has a very lovely camp fire circle so the Cubs proceeded to build a very large camp fire and learn about the correct way to do it under the instruction of some scouts. We would be having a camp fire later, but first we would have a small hike around Newbury. The hike would take us along the towpath of the Kennet and Avon Cannel and then through the Town Centre. 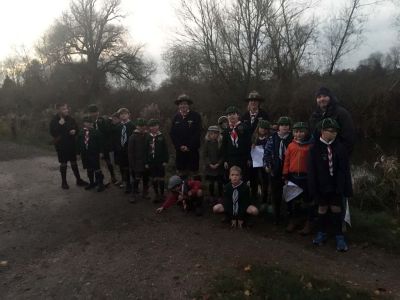 Once we returned from the hike it was time to collect our food. As this was a special treat, everybody would be having cod and chips or sausage and chips from a local chip shop. Nearly everybody ate everything!
After dinner, it was time to don our camp fire blankets and begin the camp fire. The weather was kind to us and we didn’t have any rain. After singing seven of our favourite camp fire songs it was time to go back into the hut.

Up to this point, everybody had been wearing our very smart and traditional uniform, but now everybody would change into his or her onesie. There were some very spectacular examples, and even the scouters joined in.
After we had got changed, it was at this point that we were honoured to have a visit from Grand Scout Master David Cooksley whom attended to join us with the film!

We all set up our beds and then got ready to watch a film on the projector. The film would be the new version of the Jungle Book. Wolf Cubs is based on Kipling’s the Jungle Book and although the film doesn’t quite follow the same story it was still worth watching it. I particularly found the portrayal of Bagheera endearing. During the film the Cubs enjoyed popcorn and sweets. As you can see from the pictures, some cubs made themselves very comfy.
After the film, it was time to say goodbye to the Grand Scout Master and then time for bed for the Cubs.

In the morning, we had a short session of exercise and then a cooked English breakfast.
The main activity for the day was to make the tallest tower out of spaghetti and marshmallows.

We ended the sleepover with Grand Howl and such it was time to say goodbye to our new friends.