Well done all Scout Group members by your hard efforts you managed to raise £707.98, but equally, if not more important you did a great number of jobs for many different people outside of your family members giving our Scout Group a great name for willing young workers doing a good job. So, a pat on the back for all you Bob-A-Jobbers. Those doing the most jobs for the most different people and the higher earners were: Beaver Felicity £30 doing 6 jobs for 10 people. Beaver Ellie £20 doing 11 jobs for 5 people. Beaver Beatrice £20 doing 7 jobs for 5 people. Wolf Cub Josh £85 doing 23 jobs for 20 people. Wolf Cub Jack £41 doing 5 jobs for 10 people. Scout Leo £41.66 doing 7 jobs for two people but also helping with great praise at the South Stoke Fireworks. Scout Charles Wake £24 doing 4 jobs for 4 people.

What a great effort by our Wolf Cub hero of the Bob-A-Job 2017 - Wolf Cub Josh Schmidt. Points for your efforts in Bob-A-Job have been added to your Beaver, or Wolf Cub, or Scout of the Year Competition results. 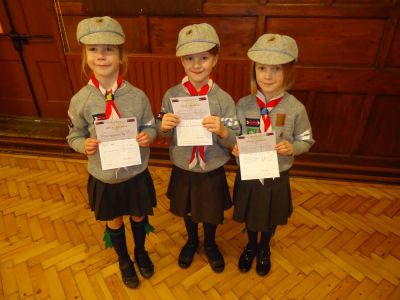 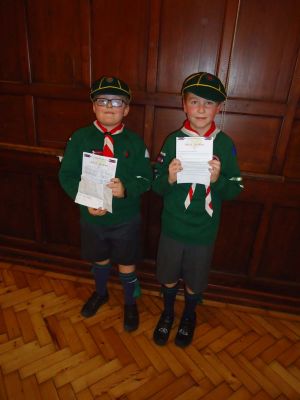 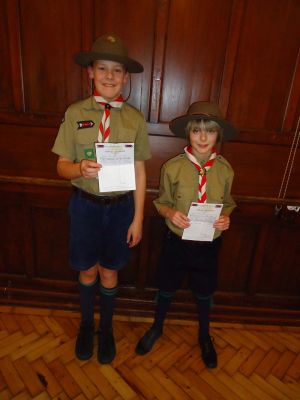 Again this year on two Saturdays in October and part of the School Half Term, the Scouts, Wolf Cubs and Beavers eagerly set out Bob-A-Jobbing and again met with the great welcoming reception that people give to see the youngsters in their full traditional uniforms prepared to do jobs for no personal gain for themselves and 'Doing a Good Turn To Others' as Baden-Powell conceived the idea.

And what a success story yet again this year, the Scouts, Wolf Cubs and Beavers put all their energy into the event and received such great compliments for jobs well done. The high earners this year for each section were as follows :-

What a great effort and a new all time record earnings by Patrol Leader Sebastian, making the total Scout Group's Bob-A-Job earnings this year a total of £670.60, whilst carrying out a great variety of jobs for a great number of different households. Whilst overall earning were slightly down on last year it was great to see the effort that the Scouts, wolf Cubs and Beavers put into this year's Bob-A-Job.

Sebastian's parents thought that you all might like to share the efforts made by Sebastian and how proud they are of what he has achieved in his 'Bob-A-Job' :

Sebastian is too proud to mention this but we thought you would like to know just how incredibly hard he has worked on his Bob-A-Job this year!

He has even accomplished 3 or more jobs per day, at the weekends and during the Half-Term, one straight after the other. He has become much more organised too this year, visiting neighbours and creating and sending out a little email leaflet of his own (listing jobs he can do). He has taken calls and 'bookings' and put all his jobs in the family diary, so we know what he is up to! The best thing of all is he is doing all the work with a smile and very thoroughly. He is enjoying fulfulling jobs that others can't, won't or don't want to do, e.g.: Feeding, walking and caring for a neighbour's dog, that is too old to survive kennels; applying smelly polish to the treasured leather upholstery of an elderly man's car; helping a lady, who has a bad back, to move books and papers from one room to another. The funniest job turned out to be doing some childcare for a local Mum who has 3 very young children. Sebastian ended up offering guidance on 'conflict resolution' between the kids!. He has also worked extremely hard on every job to do a very thorough job and clearing up afterwards! I have had some lovely comments back from his 'clients'.

Bob a job this year has been a real turning point for Sebastian and thank you again for all your encouragement. He really does love being a member of your Scout Troop and especially being a proper British Boy Scout.

Again this year on two Saturdays in October, the Scouts, Wolf Cubs and Beavers eagerly set out Bob-A-Jobbing and met with the great welcoming reception that people give to see the youngsters in their full traditional uniforms prepared to do jobs for no personal gain for themselves and doing a Good Turn To Others as Baden-Powell conceived the idea.

And what a success story again this year, the youngsters went at it 'hammer & tongs' and received such good compliments for jobs well done. The high earners for each section were as follows :-

Scouts:
Max earned £77.00 carrying out 24 jobs for 20 different households
Seb earned £59.50
William earned £38.20
Average Scout member earnings £21.23
Most of the Girl Scouts within our Troop earned more than the average

What a great effort and all time record earnings by Scout Max, making the total Scout Group's Bob-A-Job earnings this year a total of £774.64, whilst carrying out a total of 324 jobs for 228 households. Checking back on records of The Boy Scout Association's Bob-A-Job earnings in 1957 in this area, the South Chiltern District (8 Troops) earned a total of £215/5s/0d, an average of 16s/5d per member When Mr. Storton was Scoutmaster, maybe someone would let us know how much this would have been in today's money value?

Clearly our Scouts, Wolf Cubs and Beavers make Baked Potatoes and not Couch Potatoes. Well Done Everyone and a big thanks to all who gave jobs during Bob-A-Job.

"Hello, I've just had Lukas  and Thomas at my house doing bob-a-job and I wanted you to know that they were a credit to your scout group. They were very polite, diligent and eager. They did an excellent job of cleaning my windows with a wonderfully positive attitude despite the fact it was pouring down with rain! They deserve a commendation. Best wishes, "

Please find below some pictures of some of our Wolf Cubs and Scouting doing Bob-a-job. 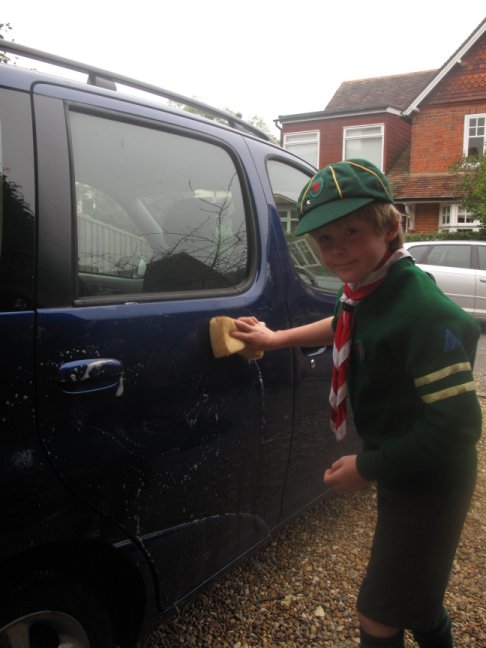 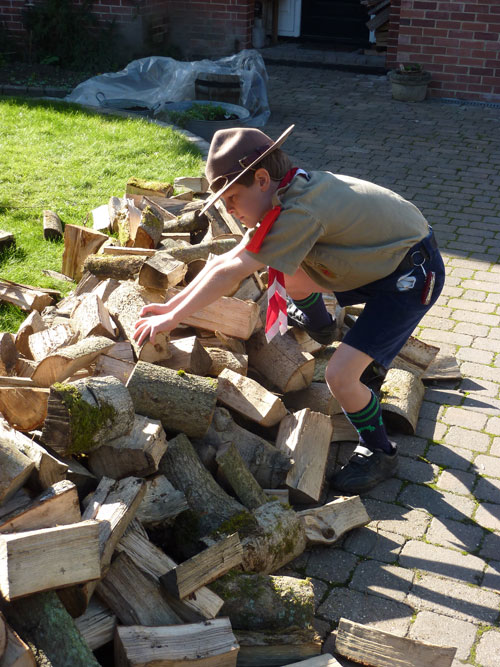 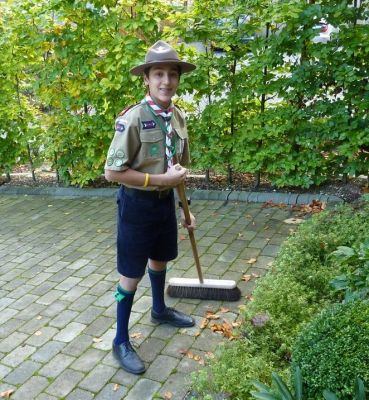 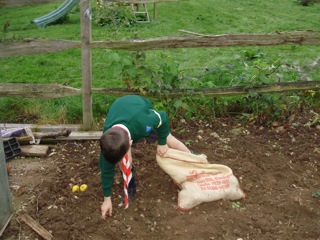 As Baden-Powell originally intended for the scheme, Bob-a-Job is for Scouts to do good turns for others by making a good job to the best of their ability in exchange for a small reward, rather than encouraging Scouts to expect something for doing nothing. Clearly our Scouts, Wolf Cubs and Beavers live up to the ideals of the scheme set by Lord Baden-Powell.

Wolf Cub ~ David £55.47. David carried out 23 jobs for 17 different people ~ David, you definitely hold the record for the highest earnings, the most jobs carried out, with the most customers ~ an all round clear record to-date. Great Scouting attitude David.

The jobs that were carried by the Group Members under their own initiative and were very diverse, included sweeping leaves, car cleaning, shopping, walking the dog, cleaning, picking apples and other gardening tasks, etc.

A great effort by all 'JOB WELL DONE'.