Wolf Cubs were introduced by Lord Baden-Powell in 1916. They were an addition to Scouts which started nearly 10 years earlier. Baden-Powell created Wolf Cubs because the younger brothers of the Scouts kept pestering their siblings, by saying that they wanted to join in the fun and excitement too.

The concept of Wolf Cubs was originally trialled as junior scouts with a programme rather like that of a watered-down Scout programme but then became Wolf Cubs giving Cubs their own identity and programme. 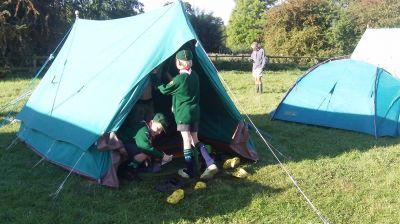 Wolf Cubs is for boys and girls aged between 8 and 11 years and is based on a book called ‘The Jungle Book’ by Rudyard Kipling.

The programme, although very different from that of the Scouts, starts the Wolf Cubs on a trail to learning all the Scouting skills needed for their future life in the Troop.

The Cub gives in to the Old Wolf.
The Cub does not give in to himself.

I promise to DO MY BEST.
To do my duty to God, and to the Queen,
To keep the Law of the Wolf Cub Pack, and to do a good turn to somebody every day.

The Wolf Cub Programme and Badges 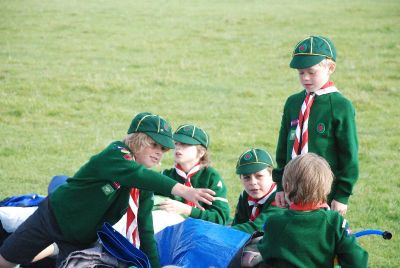 Important facts about being a Wolf Cub at 2nd Goring and Streatley Scout Group:

Age: You can join Wolf cubs straight after your 8th birthday and can start going to Scouts when you are 11.

The Wolf Cub Half Salute

Grand Howl takes place at the beginning and end of a pack meeting. Wolf Cubs is of course based on the Jungle Book. The wolves sit around the council rock in a circle and when Akela takes his or her place on the rock they all threw up their heads and howl their welcome to him or her. When Akela calls PACK! - PACK! - PACK! the Wolf Cubs all respond with a prolonged PACK! in unison as they form a circle around Akela. The Wolf Cubs should be at ease. When Akela lowers his or her hands, all invested Wolf Cubs squat down and put their hands between their legs with their index and middle finger of each hand touching the floor.

The word 'best' should be yelled loud and short, and all together; at the same time the Wolf Cubs should spring to their feet and stand at the alert.

All Wolf Cubs will then salute with both hands, their hands next to their ears with two fingers up forming the wolf ears. This means that the Wolf Cub does his best with both hands so is better than anybody else's best.

The duty Sixer should then call to the pack:

On the last DYB, the Wolf Cubs should drop their left hand by their side and form the normal wolf cub salute, only with their right hand.

If you want to find out for yourself what we get up to, then please click here for more information and to contact us. 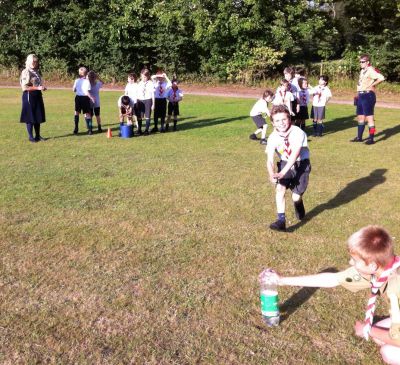