This year's Association's St. George's Day Parade and Service took place in Sherborne, Gloucestershire where a new BBS Scout Group had just been formed. 2nd. Goring & Streatley chartered a 60 seater coach to take us all to the parade, but even two cars had to follow carrying the 65 booked to attend. Our party comprised the Beavers, Wolf Cubs, Scouts, Senior Scouts, Scouters and our new Rover Crew. We all gathered at Goring & Streatley Railway Station at 7:45am on Sunday, 24th. April, 2016 ready to depart at 8:00am on the dot.

On arriving at Sherborne we had a quick snack before joining with the main parade comprising contingents from four BBS Scout Groups. The parade was led by a bagpiper and drummer so it was easy to maintain a good marching pace and all in step. The parade was just over a mile long to the beautiful Mary Magdalene Church at Sherborne that adjoins the very historical and very grand manor house. Just before the church there was a Saluting Base occupied by the High Bailiff of Northleach, his wife and old members of the BBS from early Scout Groups in Cirencester and Gloucester. The service was prepared by David Cooksley, Chief Commissioner and involved as many of the scouting congregation as possible from all the groups in attendance and was led by Canon Ron Lloyd. 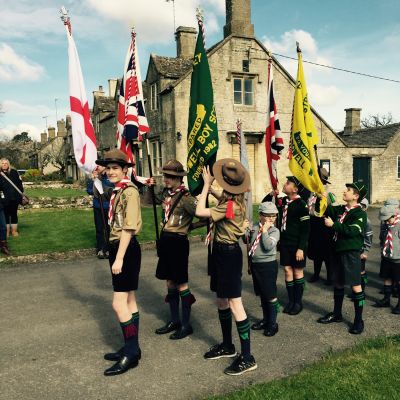 After the service, we marched back up hill to the start point, where one of the BBS Scout Groups had camped for the weekend and had prepared an excellent hog roast for all attending the parade. After a social gathering with the other groups, your Scout Group boarded the coach at 2:00pm to go to the 'Crocodile of the World Park' at Brize Norton, the Scout Group members all agreed that this was a fantastic place to visit, apart from crocodiles of all sizes, there were otters, noisy kookaburra, meerkats (not in our uniform this time) that the park had arranged feeding times for all these animals during our two-hour visit. We can well recommend a visit to this park. Finally, we arrived back at the Goring & Streatley Railway Station at 6:00pm after a long day.